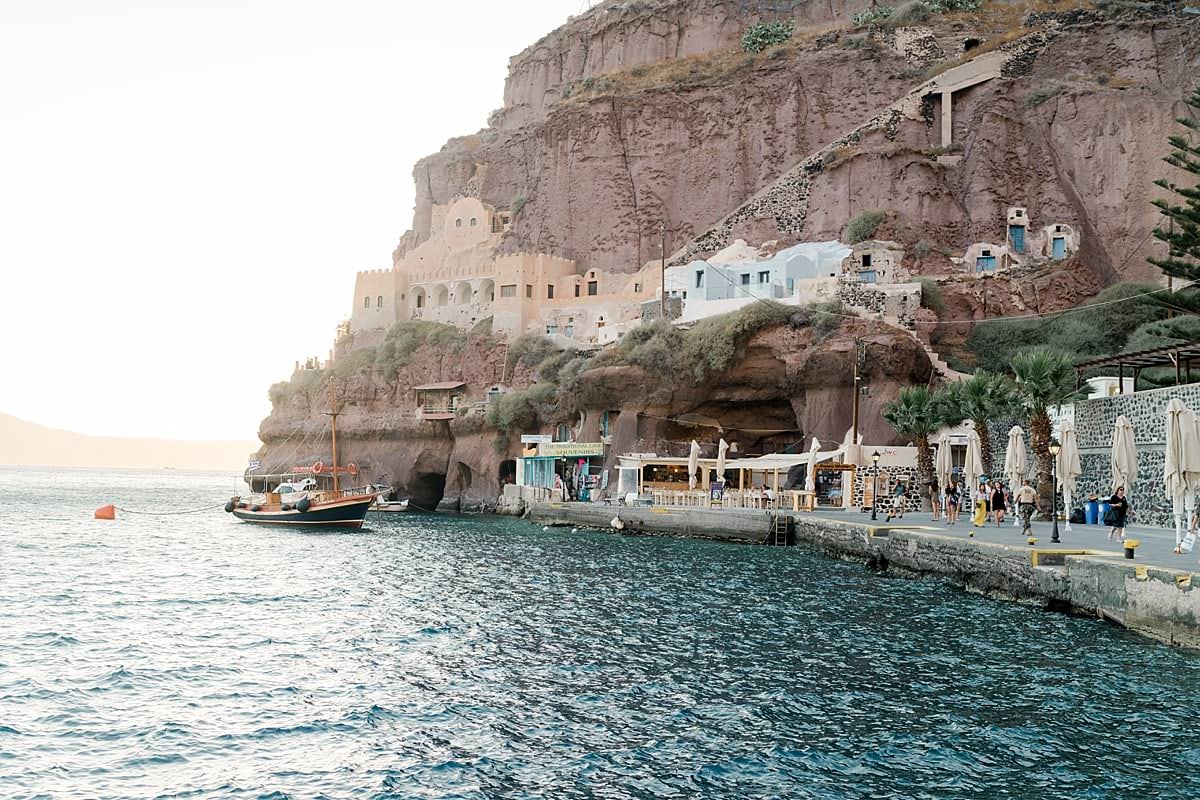 After our short trip to Rome, we embarked on a Royal Caribbean 7-Night Greek Isles Cruise. Sailing out of Rome, we had port calls in Santorini, Mykonos, Athens, Katakolon, and ending in Rome.

When we found out we were moving to Europe, we decided that we were going to take a really big summer vacation. Wes had a ton of leave to use (or he was going to lose even more than he normally does) and we were overdue for a real family vacation. We wanted a vacation, not a non-stop sight-seeing trip – the goal was to relax and recharge after a really crazy season. Or if I’m being really honest, a crazy 3 years. 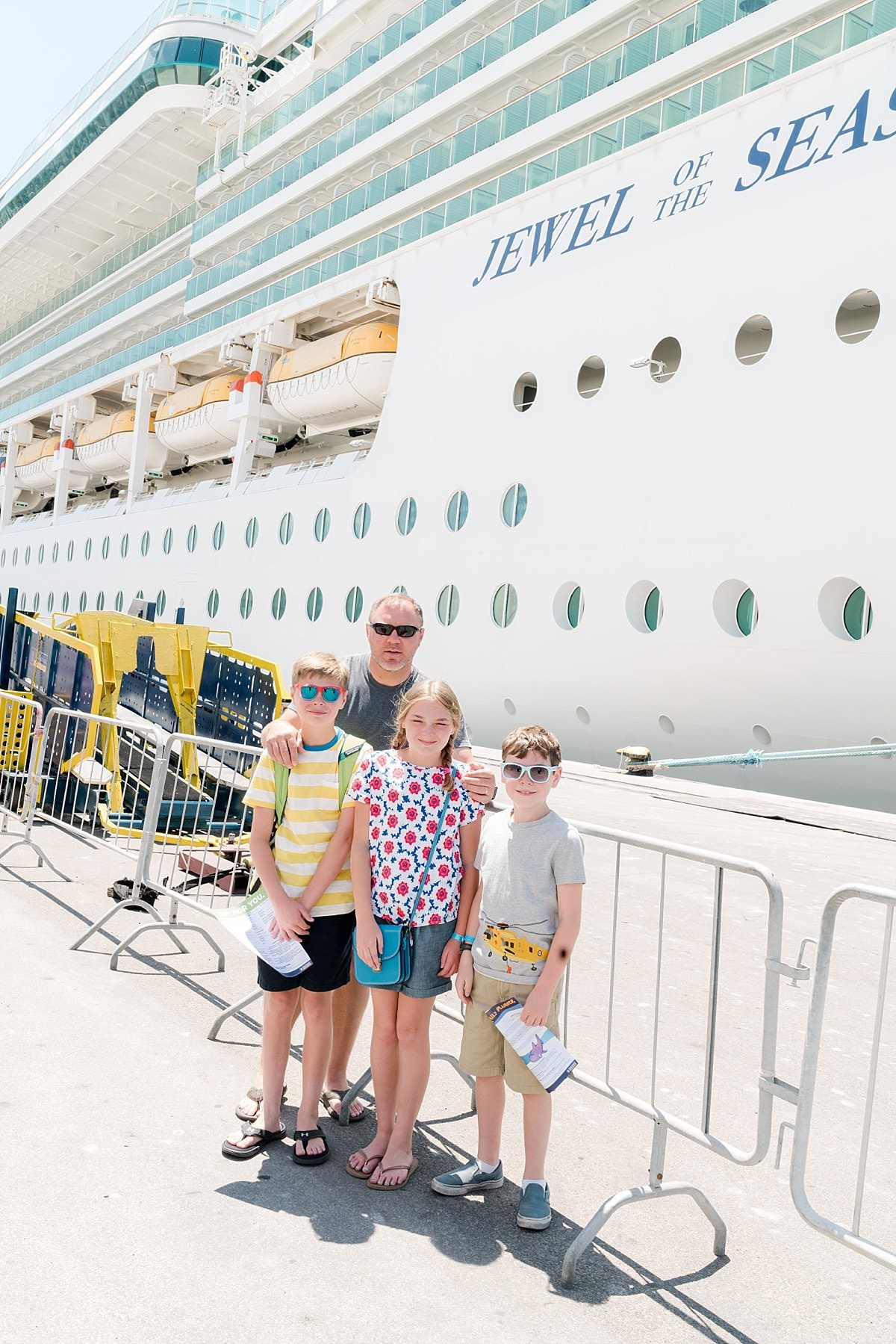 Initially, we were going to do the UK, but we were trying to plan that along with the logistics of an international move – it was just too much for my brain. Nor would it have been relaxing. At. All. One night, Wes and I were at our favorite local dive bar on the Cape and I threw out the idea of a cruise. I had only been on one before and I was really into the idea of all of the decisions and planning being made by someone else. I remembered thinking that the kids would have loved the cruise that I went on the previous year. Wes quickly was on board (no pun intended) and the whole thing was planned and booked a day or two later. Pro tip – call to book. The agent was incredibly helpful and could answer any questions we had while in the process of booking.

We did have specific dates, so that dictated a lot of the planning. We didn’t really care where we went, so we found a cruise with dates that worked for us, and booked it. Because there are five of us, we needed two rooms. Wes and I had a balcony room and the kids had an interior room across the hall. It worked perfectly. They really were only in their room to sleep and they would come to hang out with us, but the truth, we rarely saw them. (The ship keeps kids really busy.) I will always splurge for a balcony room. Cabins are small and it gives you a whole other room, plus the ocean breeze. I would eat room service breakfast every day and read while sipping my coffee. I really got spoiled. It was also nice to have two bathrooms and showers between the five of us. 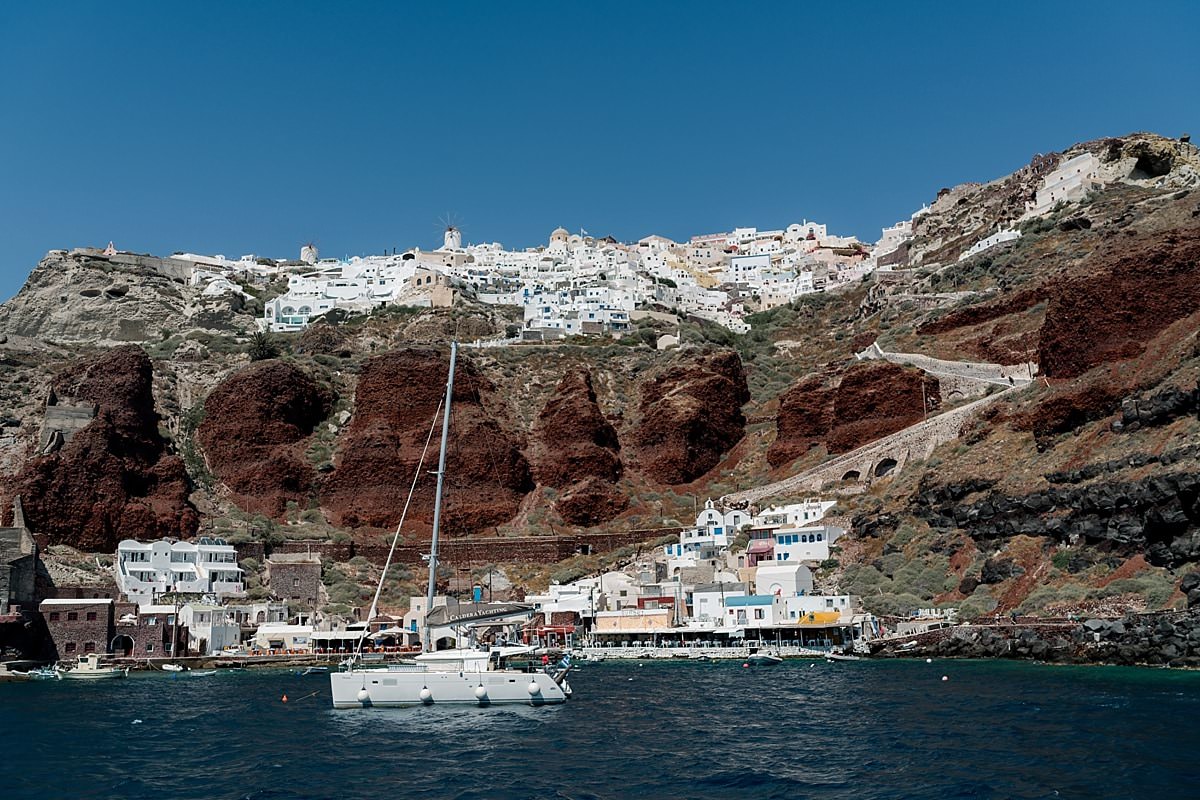 Greece was high on the list of places we wanted to go, and this was a great way to see it. I highly recommend seeing Greece this way, I don’t think that I could spend a week on a Greek Island, but a couple of full days on a few of them? I’m into that.

Our first port call was Santorini. We did not plan any excursions or plan really anything for that matter for the whole cruise. We quickly figured out what worked best for us. We were never in a rush to get off the boat. Our room overlooked the gangway so we could see when the rush was over and then we would leave. We took the tender to Thira and then got on another boat that took us to the other side of the island, Oia. 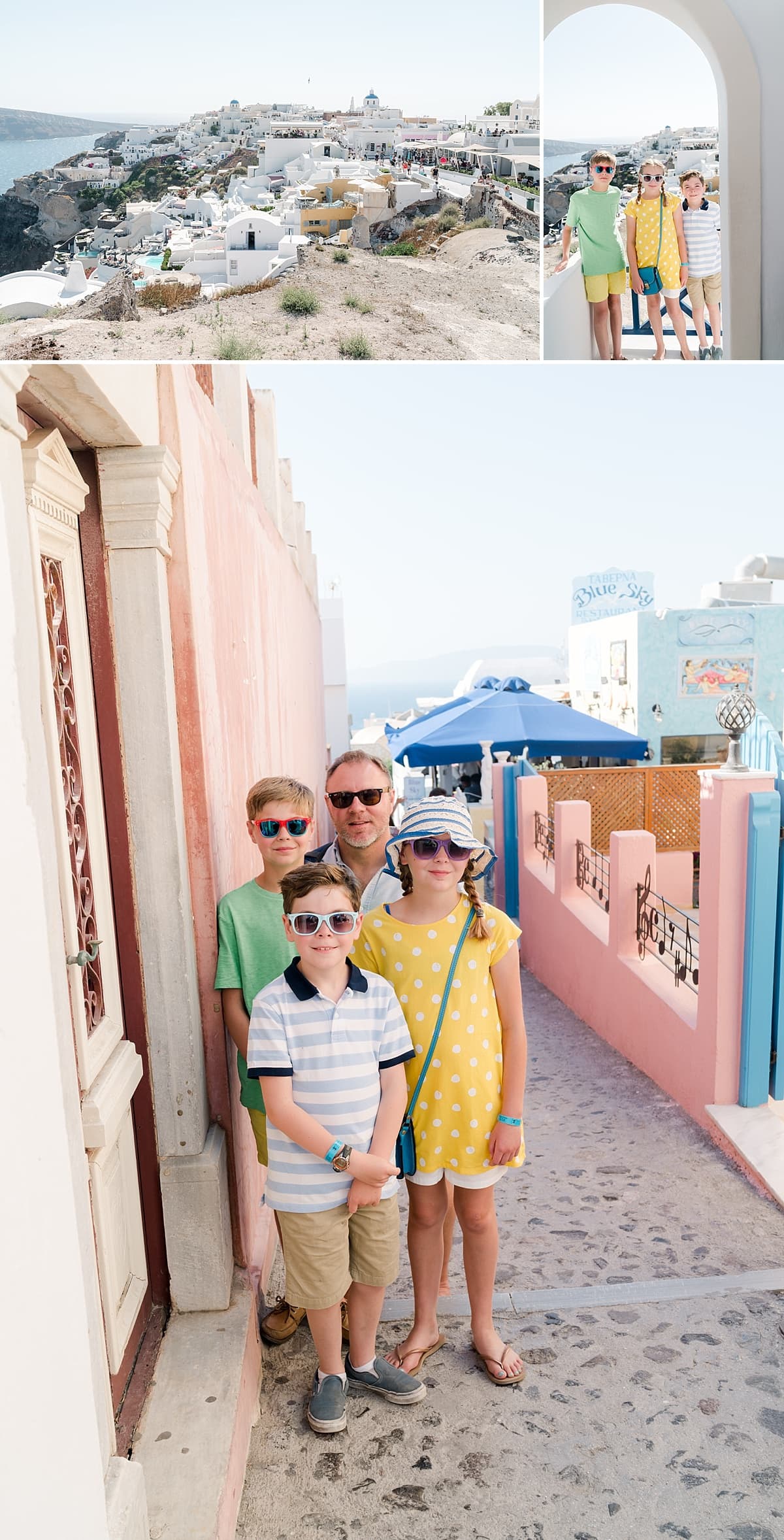 To say that Greece is beautiful really doesn’t do it any justice. It is truly one of the most gorgeous places my eyes have ever seen. Santorini is built into the cliffs and when you look up, you see the white buildings with the occasional blue roof. We made our way up to town and played tourist. Considering a cruise ship was in port, it was not overly crowded, I think taking the boat to Oia instead of Thira helped. We spent the afternoon eating incredible Greek food, shopping in cute little boutiques, and soaking up the sunshine. 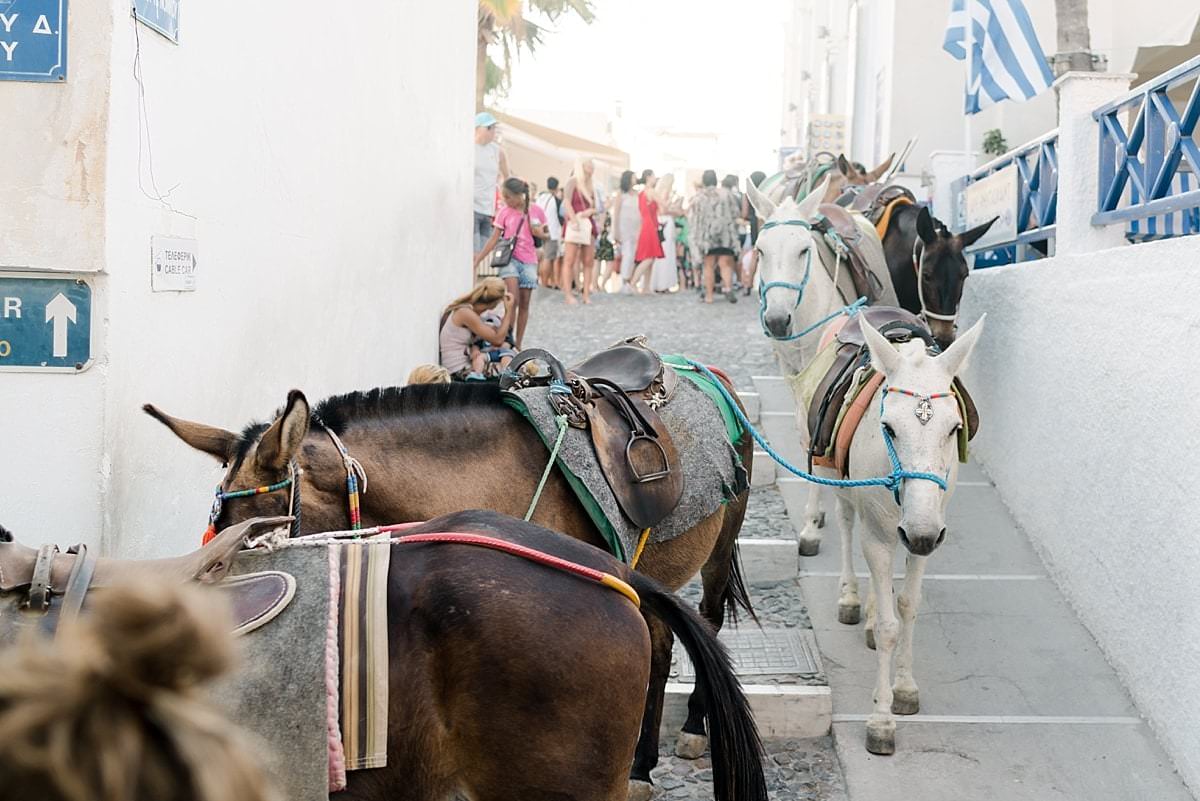 We hopped on a bus that took us back to Thira. We had an early dinner and watched the donkeys make their way up and down the streets. (You can ride them up and down, but I don’t know how I feel about that.) We walked around and then took the cable car back to the dock to get back on the ship. I would absolutely come back to Santorini if it was just Wes and I. It screams romantic getaway, but not really a family vacation. 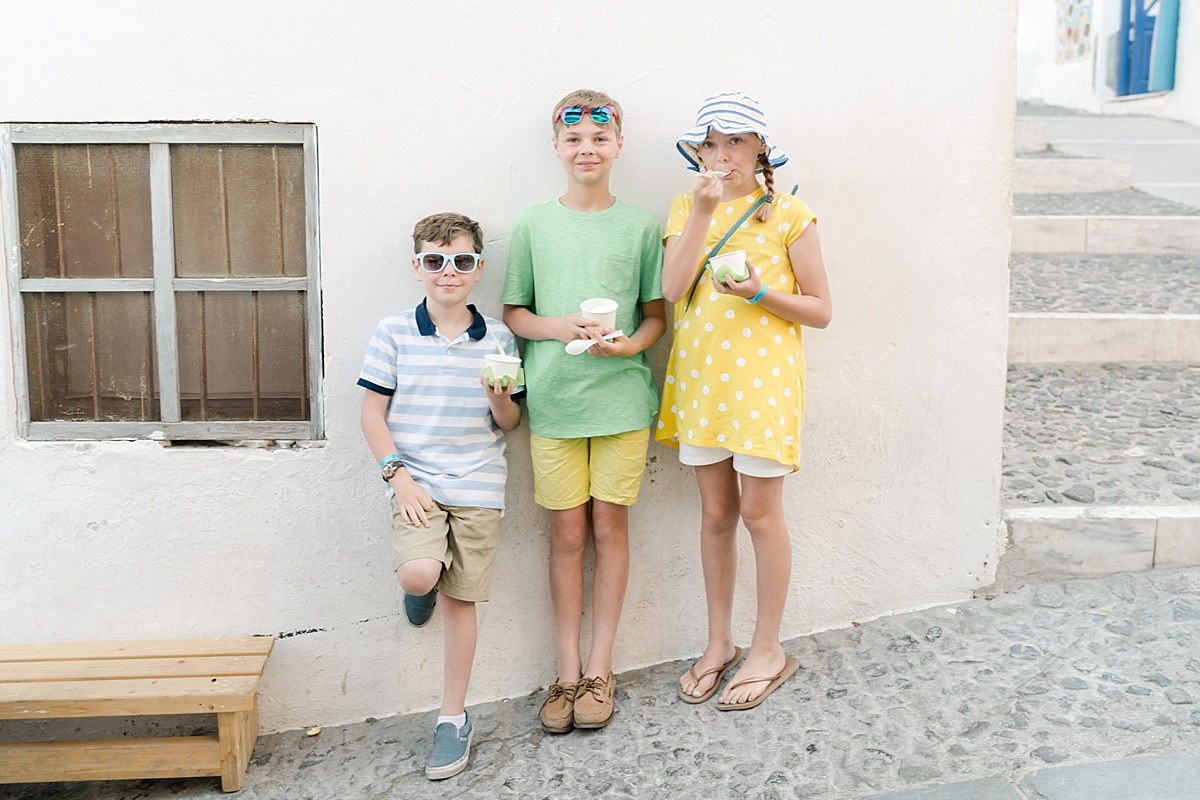 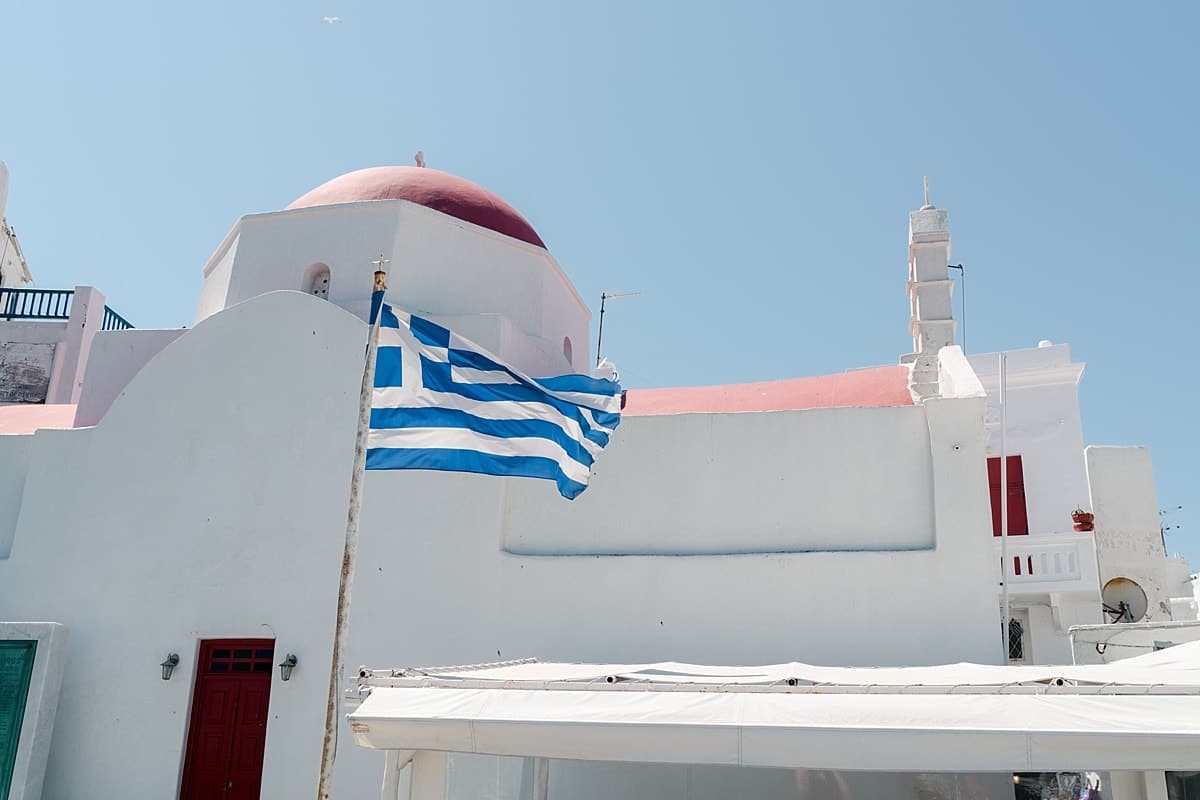 The next port call was Mykonos. (I will never, ever, be able to say Mykonos and not think of Lindsay Lohan. You’re welcome.) Again, we took our time getting off the boat and when we did, we beat the rush. I don’t love crowds, so this MO worked really well for us the whole cruise. Mykonos is similar to Santorini, but not built into cliffs. It is the same gorgeous white aesthetic, but the water is the most incredible aqua blue you have ever seen. It’s magnificent. We spent a few hours wandering around the island, ate an incredible meal and watched the boats come in and out. 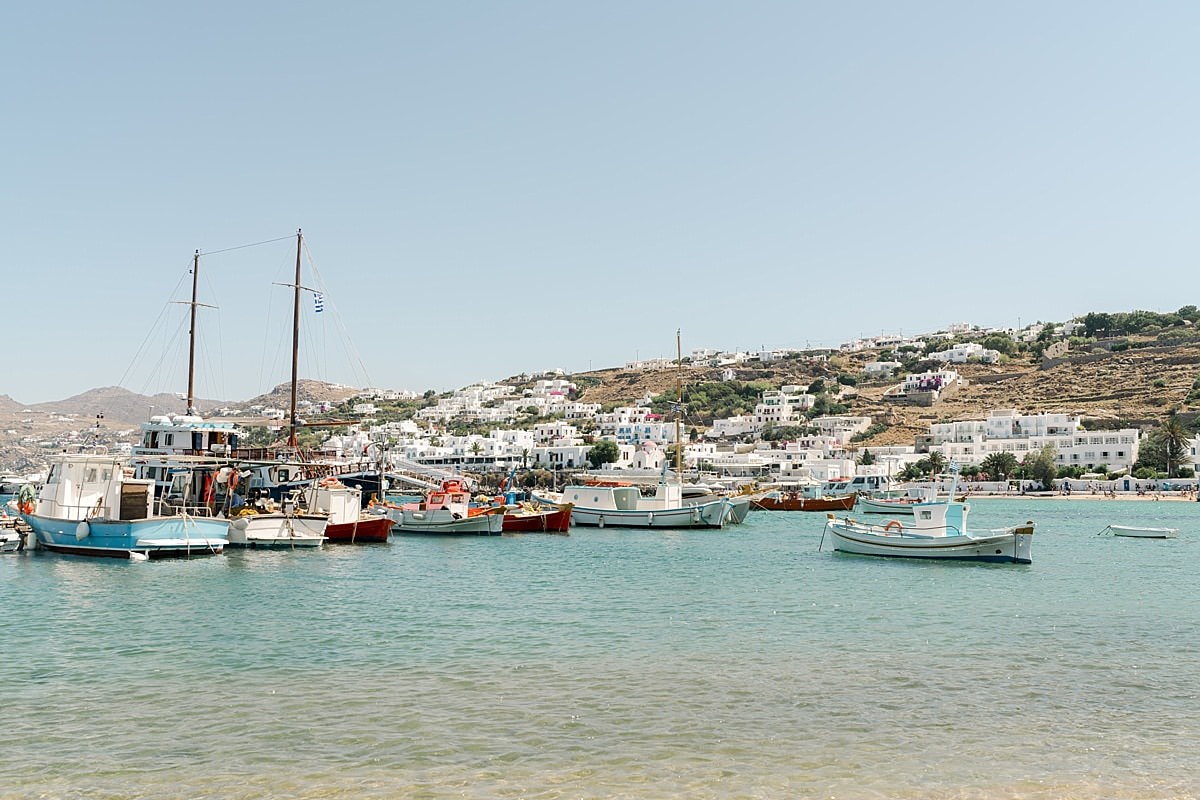 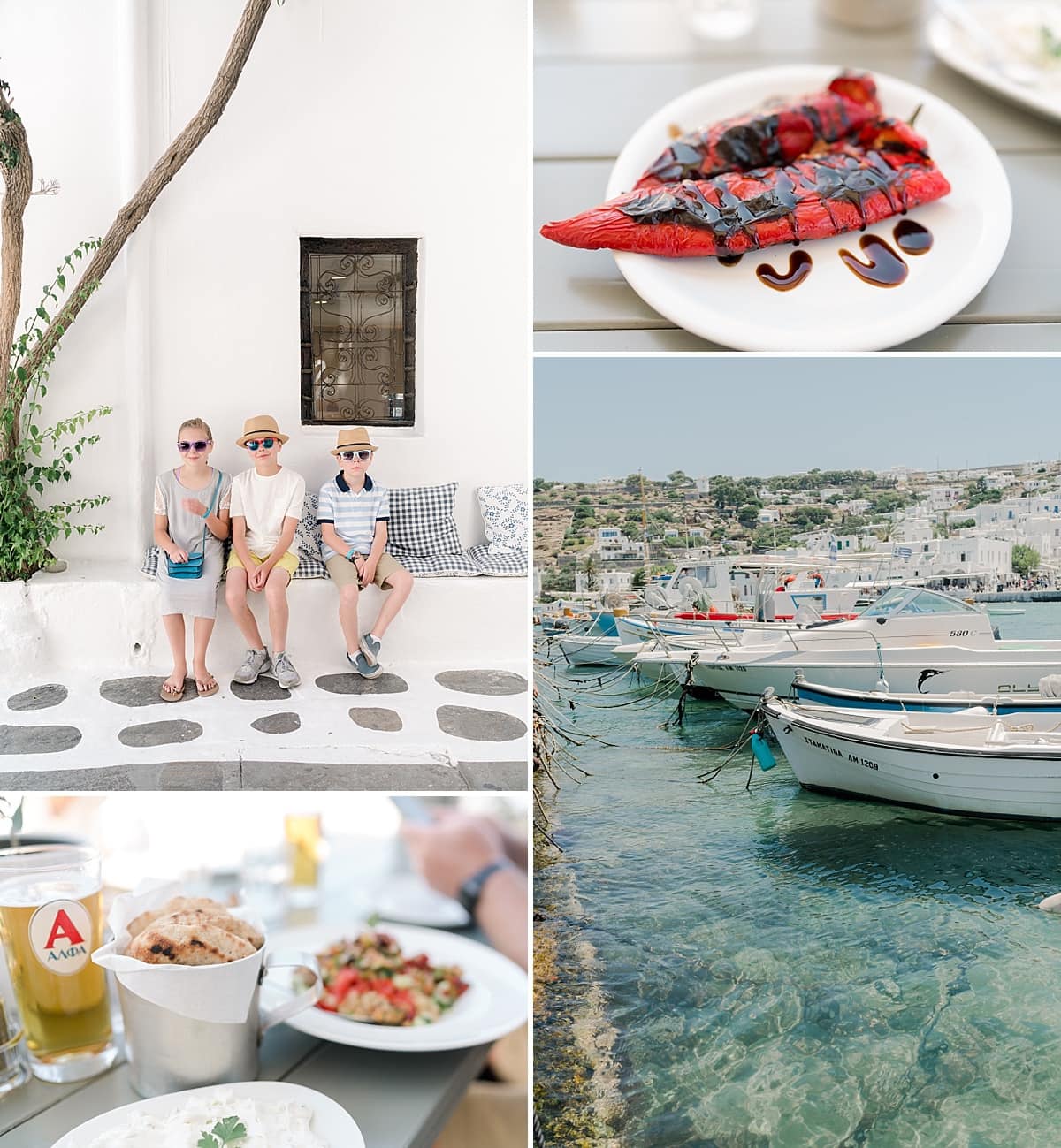 We skipped the Athens port call. It is a long bus ride from the port and it was a million degrees out. I don’t really do well in extreme heat, so we decided to stay on the boat and play in the pool and I went to the spa. It was a glorious day. The ship was empty and we had free reign. 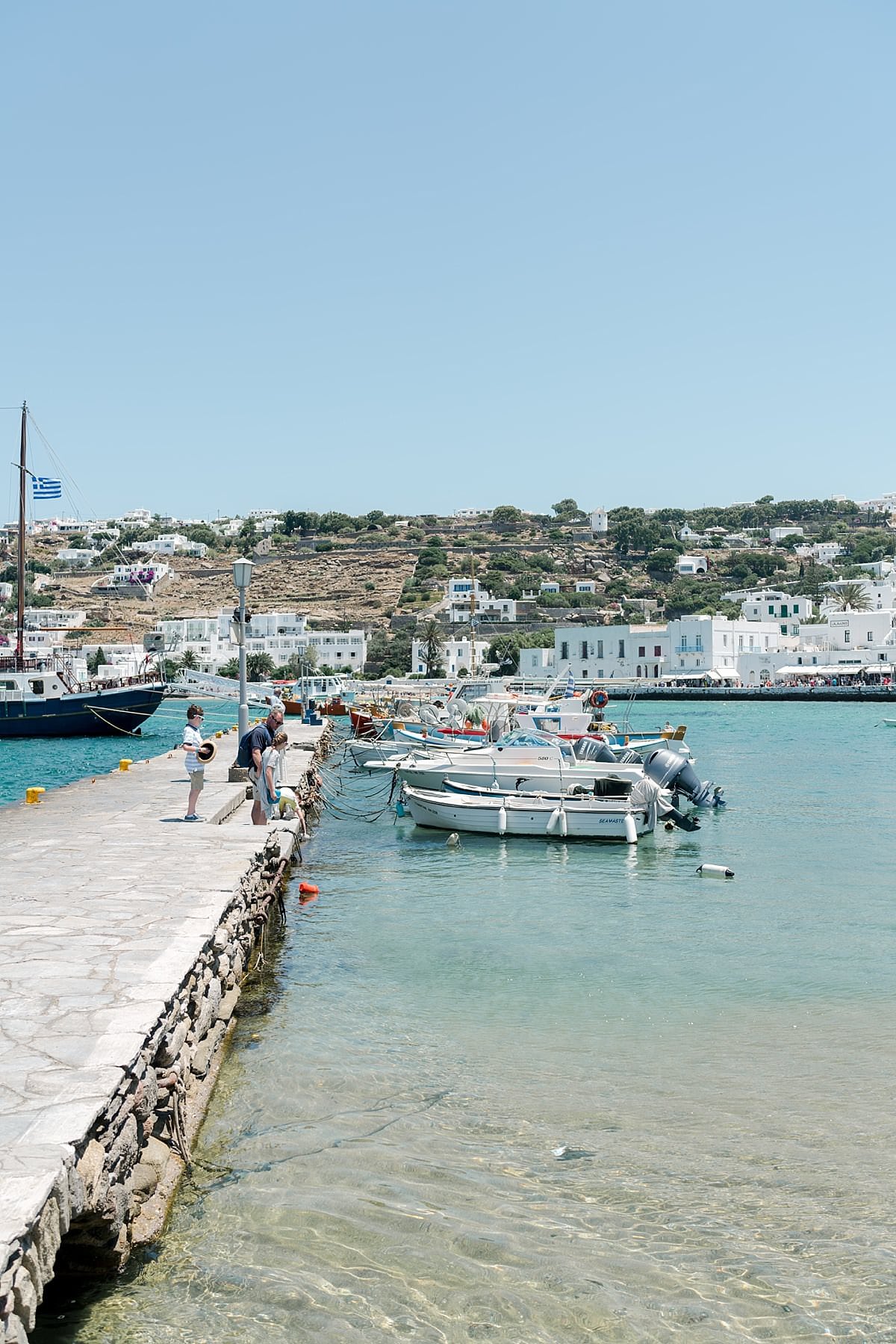 The last stop was Katakolon. When I look back and think about perfect days of my life, I will always think of this one. Katakolon is a tiny fishing village and home of the Olympics. We got off the boat and walked to the taxi stand and asked the driver where he would spend the day. He asked us if I meant where everyone else goes, or where he would go. 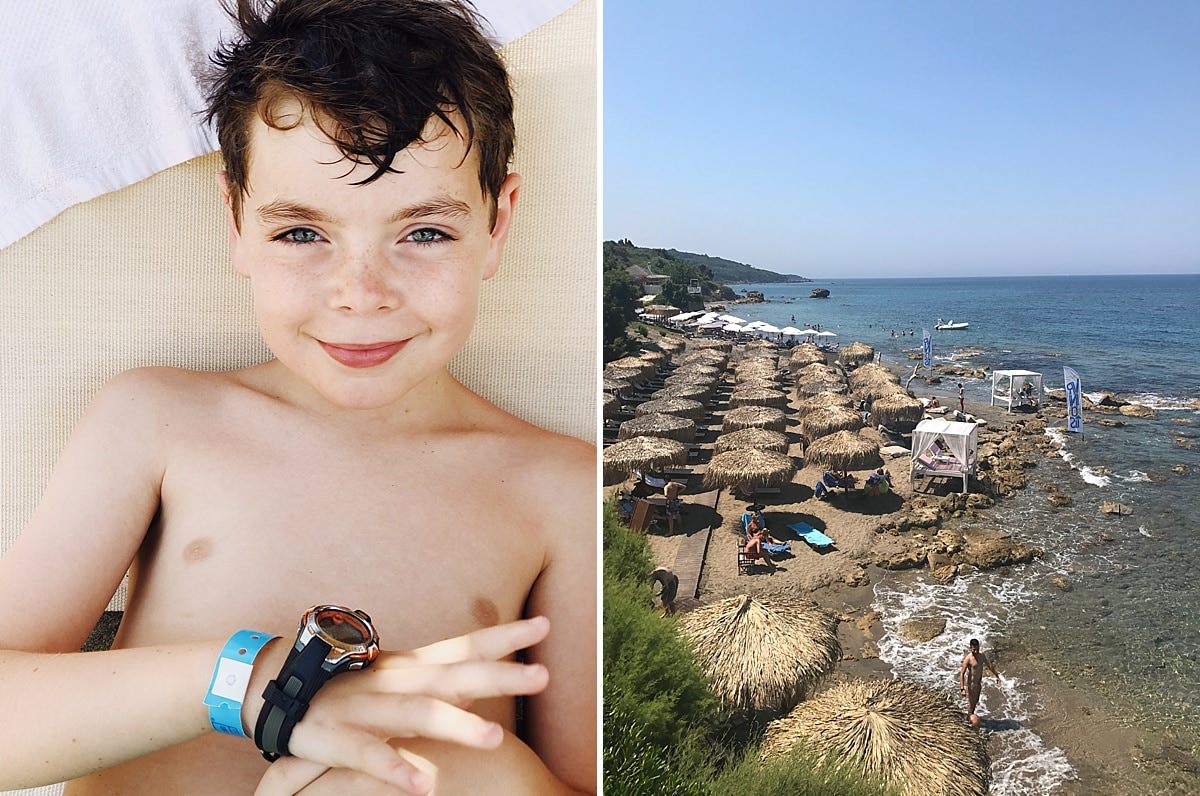 I wanted to go where he would go. He drove us to a hotel about 10 minutes from the port and he told us to buy a couple of drinks and we could sit on beach chairs all day. It was absolute perfection. The kids played on the beach and swam. We sat in chairs and ate delicious Greek snacks and drank cold beers.  The weather was perfect and it was one of the most perfect days with my family. 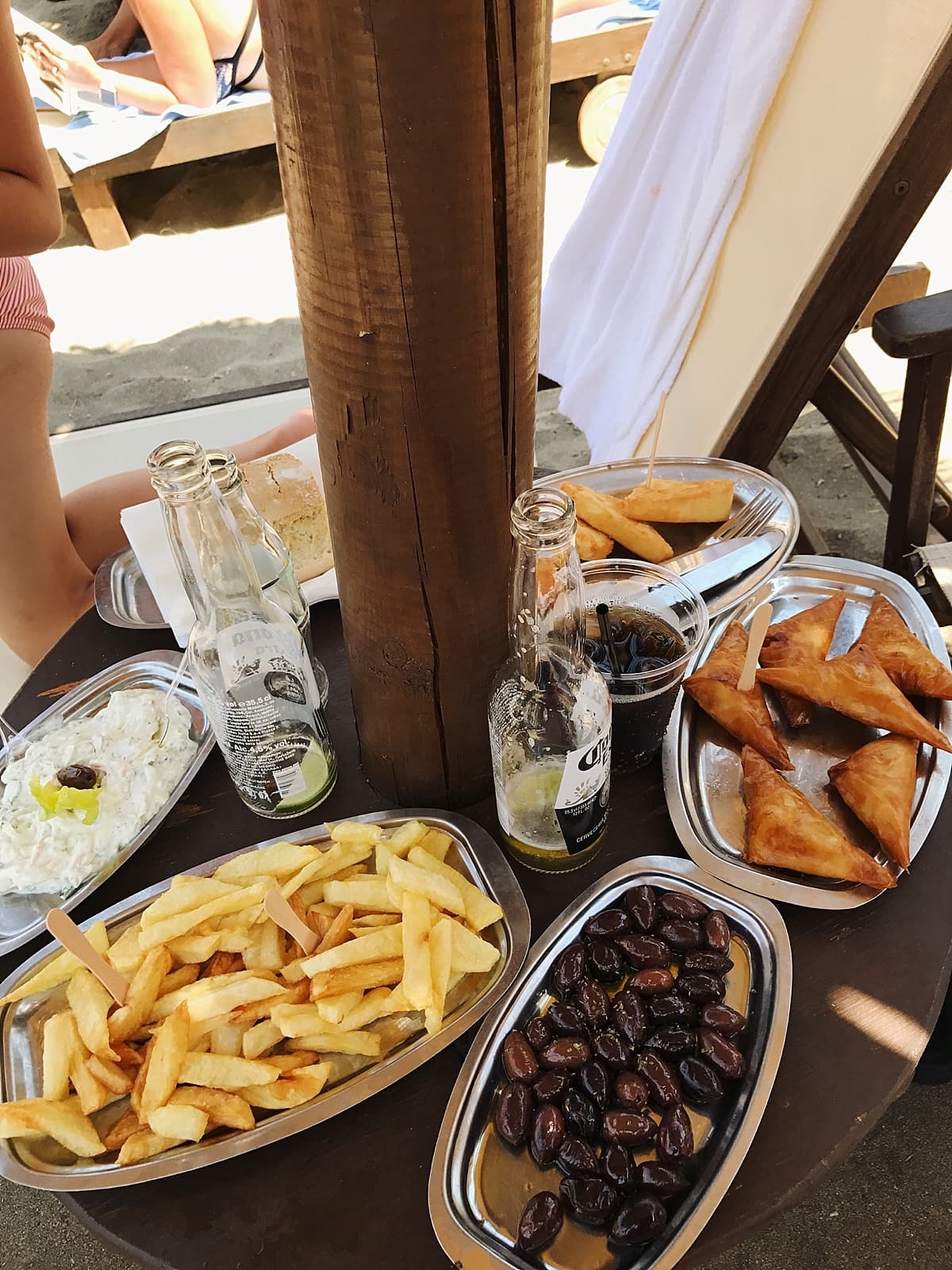 I made a family film about our day, it gives a better view of the beach.

We went to Katakolon Greece from Bree Hester on Vimeo.

The taxi driver came back to pick us up and we asked him to drop us off in the town. 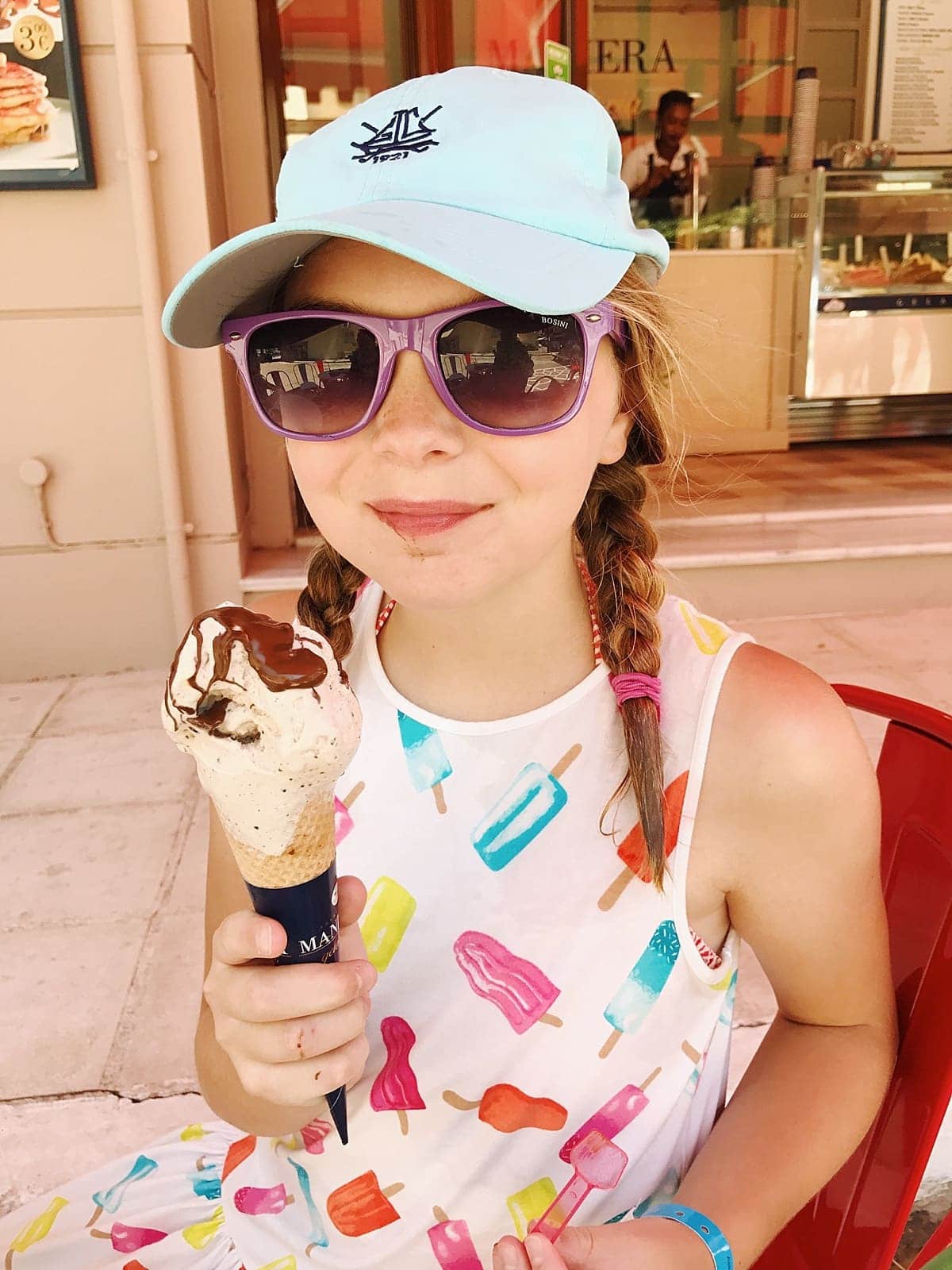 We got the best gelato we’ve ever had. They have a Nutella fountain and pour it over your ice cream. It was divine. It was such a fun day. We made our way back to Rome and continued our vacation from there. Next stop, Amalfi!

The cruise was an excellent idea and my children’s preferred way to travel. Any time we talk about ideas on where to go next, the kids volunteer a cruise. It is an incredibly  easy way to travel and so kid-friendly. Everyone was able to do their own thing and do what they wanted to do. There was a lot to do for Will and a lot for Clay. Ava was in a middle-ish age and didn’t fit as well into the kid programs, but she still had a great time. 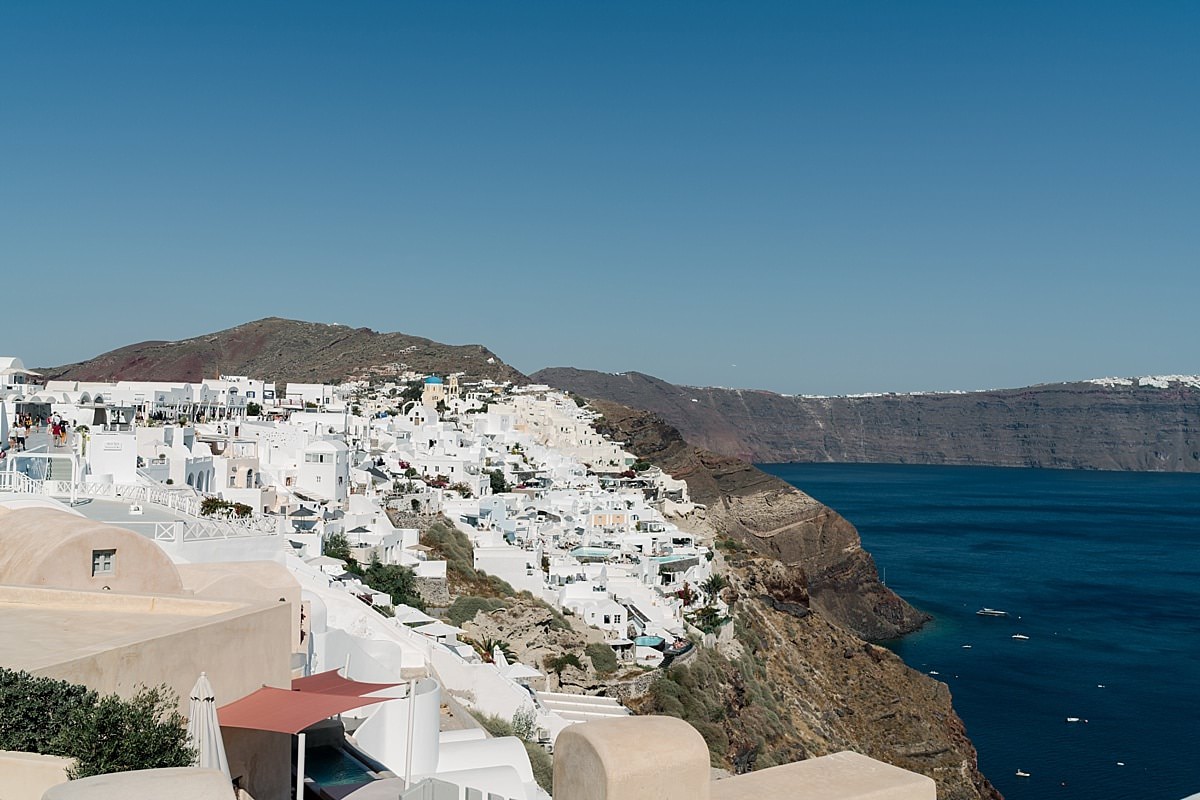 Would we do it again? 1000%. It was an incredible experience and one that we will remember forever. 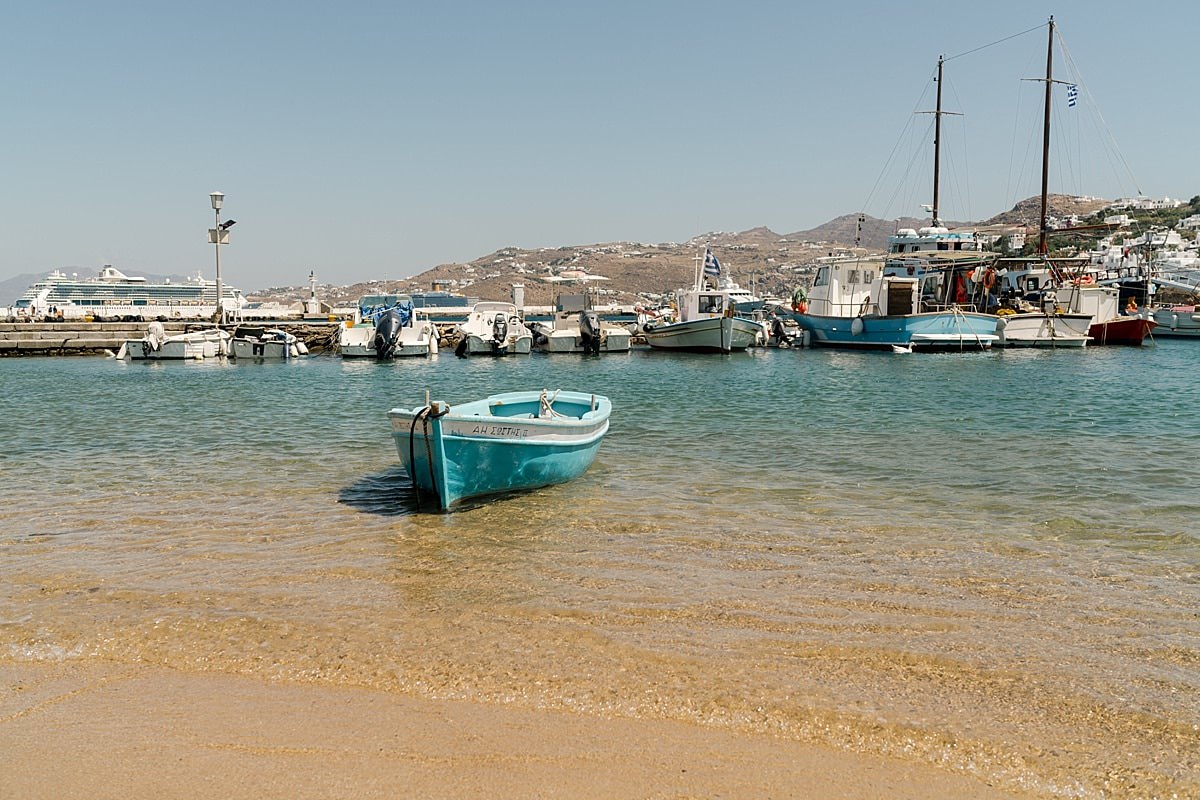 This is not sponsored in any way, we paid for everything ourselves. I just wanted to tell you how awesome it was.

Hi Bree! My family and I are taking a Greek Isles cruise next summer and I'd love to know the name of the hotel in Katakolon. Looks like our type of place! Thank you! Jill

I don't have the name, but I would ask the taxi driver. Show him a picture from this post. It is about 10 minutes from the taxi stand.

[…] you read about our Greek Isles Cruise experience, you might remember that this was a rest and relaxation trip. The goal was to spend time together […]

what fun trip, gorgeous photos, would love to go there, thank you for sharing your trip!

Thank you Sabrina! It was such an amazing vacation that we will never forget.

[…] you’re traveling to Greece, this is the itinerary you need to take. […]