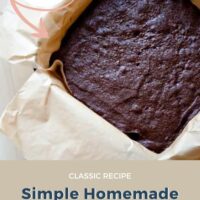 This simple, homemade brownie recipe made with cocoa powder is rich and chocolatey and can be in the oven in no time.

There is nothing better to have in your dessert repertoire than a simple brownie recipe. It’ll make you forget that you ever used boxed brownie mix. These homemade brownies are so easy to make and I can guarantee that people will be impressed when you tell them that the brownie they’re eating is made from scratch.

The reason why I think that having a good brownie recipe up your sleeve is so useful is because it can be the foundation of so many other delicious creations. For example, you can use it as the base of an ice cream sundae covered in caramel or chocolate sauce.

Or you can crumble it up and use it as the base of a trifle.

Or, if you’re like me, you can even sit on the couch and watch reruns of your favorite tv show and eat brownies until you cannot eat brownies any more. (No one will know.)

You only need 7 ingredients to make these brownies from scratch, and I bet you have most, if not all, of these items at home.

How to Make Easy Brownies //

To say this homemade brownie recipe is easy to make would be an understatement. Can you mix together some chocolate and sugar? You can? Then you can make these bad boys.

Step 1: Over a pot of boiling water, combine the butter, sugar, cocoa and salt in a bowl. Melt, stirring occasionally. Let the mixture cool a bit.

Step 2: Add the eggs one at a time. Then add in the vanilla.

Step 3: When everything is nice and combined add the flour.

Step 4: Line an 8×8 inch baking pan with parchment or tin foil. Let the parchment hang over the side of the pan so that you can get the brownies out easily when they are cool. Pour the batter into the prepared pan.

Step 6: Remove the brownies from the oven. Let them stand for a few minutes to cool, then pull the brownies out of the pan using the parchment paper.

Your brownies are ready! Cut them into squares and enjoy!

Are Brownies Better with Butter or Oil //

Butter and oil are both commonly used in baking, and there are pros and cons to each. This recipe calls for butter, but you can substitute a neutral oil such as vegetable oil. Just use half a cup of oil to replace the butter.

When making brownies from scratch, I prefer to use butter because it gives them a richer flavor. As the brownies bake, the butter provides a subtle caramelized taste that complements the chocolate and takes these homemade brownies to the next level!

On the other hand, using a neutral oil is much healthier than butter. Butter is a saturated fat, while vegetable oils are unsaturated. Unsaturated fats are better for heart health! Oh, and using oil also makes your brownies less fudgy and more chewy, so you might consider that factor too!

How do you Make Fudgy Brownies //

As I mentioned above, using oil instead of butter in your brownie recipe will give you a chewier consistency. If you’re aiming for a richer, fudgier brownie, the secret is to use more fat. You can increase the amount of butter slightly, to 1 and 1/3 sticks.

Another easy secret for achieving fudgy brownies is to add chocolate. This recipe only calls for cocoa powder, but if you have a bar of dark chocolate or baking chocolate, you can roughly chop the chocolate, and mix some of these pieces into your brownie batter. These bits of chocolate will melt in the oven and the result will be a decadent, extra chocolatey brownie.

How do you Make Cakey Brownies //

If you prefer a lighter brownie, with a more cakey texture, you can slightly reduce the amount of flour you use. This might seem counterintuitive, but flour contains gluten, which makes the brownies more dense. If you use a few tablespoons less flour, and add a teaspoon of baking powder, your brownies will rise a little more.

I would also recommend adding a splash of milk. Cakey brownies run the risk of being dry, and even just a little milk will keep your brownies nice and moist.

Your brownies are ready! Cut them into squares and enjoy!

I would add vegetable or canola oil to this recipe to better the taste and dryness in my opinion.

Thanks for the tip Sharon

Bakedbree, how long have you been making brownies? Did you come up with this recipe?? And if so its amazing,fast, and simple!!

I'm about to make them, and from reading all the comments I'm pretty sure their going to turn out great!!❤