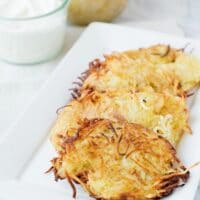 I hardly ever fry anything in my house, but for homemade potato latkes, I’ll make an exception. You’ll most likely need to work in batches, but I think frying latkes in a skillet is the way to go. When served with cool sour cream and tart applesauce, this recipe is next-level delicious. Having latkes for Hannukkah is a big tradition in my family but I like having them all year long. Happy Hanukkah!

What are Potato Latkes?

The word “latke” is Yiddish for “pancake.” so they are potato pancakes! While latkes recipes differ slightly from one Jewish family to the next, they all have one thing in common -shredded potatoes fried in oil. The oil symbolizes the miracle of Hanukkah and the tiny bit of oil that stayed lit for eight straight days. The more you know!

First things first, peel all of the potatoes (or recruit a handy assistant to do it for you).

By hand or with a food processor, grate the potatoes and onion.

Step 3: Dry the potatoes and onion.

This is the most crucial step! To make crispy latkes, the grated potatoes and onions must be super dry. I spread them over a hand towel to absorb the moisture and then roll them up to squeeze out the rest.

In a large mixing bowl, add the dried potatoes and onions, eggs, flour, salt, and pepper (do not be shy with the seasonings -latkes need a lot of salt and pepper). Mix the ingredients until the mixture is just combined. You want it to have texture, but it shouldn’t clump together.

Using about a 1/4 cup of batter per patty, mold the mixture into about 4″ rounds.

In a cast-iron or large heavy-bottomed no-stick skillet, add oil filling the pan about 3/4″ high and heat over medium to medium-high heat until hot but not smoking. Make sure the oil is hot enough (ideally between 360 and 375 degrees F). Otherwise, you will end up with a wet and soggy latke.

Pan fry potato pancakes until they are browned and crispy on both sides. Please do your best only to flip them over once.

Transfer crispy latkes straight from the hot cooking oil to a paper towel-lined pan. I like to let them soak in layers divided by paper towels.

If needed, sprinkle with a bit more salt to taste. Serve with sour cream and apple sauce. Enjoy!

Russet potatoes are hands down, the best kind of potatoes for latkes. They are the starchiest type of potato, budget-friendly, and are available all of the time. Yukon gold potatoes are a good alternative.

Why are Potato Latkes So Good?

Variations for Latkes or Potato Pancakes //

Wondering what goes well with these potato pancakes? Traditionally, sour cream and apple sauce are served on the side. Make it a Hunnakah-inspired feast and serve fresh latkes alongside these recipe pairings:

How to Store and Reheat //

Storing: Keep leftovers wrapped individually in an airtight container in the fridge for 2 to 3 days.

Reheating: You can reheat the latkes from frozen on a baking sheet at 375 degrees for 10 to 15 minutes or in the air fryer for 5 to 10 minutes.

Freezing: I recommend letting them cool completely before freezing each piece solid on a baking sheet. When the rounds are frozen solid, transfer them to a freezer-safe container and freeze for up to a month.

How many potatoes do I need for latkes per person?

You’ll need at least 1/2 of a large russet potato per serving. To be on the safe side, I’d account for one potato per person.

Can I make fresh latkes with sweet potato?

You can make this recipe with sweet potato, brown sugar, cinnamon, and cumin and serving it with mango chutney, it is an excellent variation.

Can I make potato latkes ahead of time?

For the best flavor and texture, latkes are best made fresh. However, in a pinch, you can make them a couple of hours ahead. I arrange them in layers separated by paper towels to absorb the excess oil and then reheat them at 350 degrees until they are heated through (8 to 10 minutes).

How do I keep latkes warm?

The best way to keep latkes warm until they’re ready to be served is to keep them in a 180-degree to 200 degrees F oven. They will be okay for about 30 minutes before starting to lose their crisp.

[…] is not fall without applesauce. I make it many times throughout the season, even into winter. Can you have latkes without homemade applesauce? Or roast pork? I just don’t think you can. This recipe is one I […]

Thanks for the great large batch recipe! I had put the potatoes & onions in the salad spinner, my newest piece of kitchen technology, thinking I could use the juices in something before I scrolled down to the towel bit; worked like a charm! I took them to my Transition Town Potluck with Purpose and they were well received! The Jewish people were surprised, too & pleased. So much easier than lefse! [another thing to do with potatoes in the dead of winter] I added an extra egg..it was too much.. Amazing how far two eggs can go! I am going to make some more and try them with plum sauce and black bean hot sauce! Happy New YEAR & THANK YOU!

The key to making a good latke is to have the potatoes super dry. And yes, one egg goes a long way.

How many latkes does this recipe yield?

It depends entirely on how large you make them. I would say though about 24.

Hi Bree! Love your bloooooooooog!! the pics are amazing too!! This recipe looks similar to one I make, but the one I make has lots of fresh mint - chopped in addition to parsley. I also add dry mint. I deep fry it though.. OMG SO DELICIOUS!

that sounds delicious. I might need to try that.