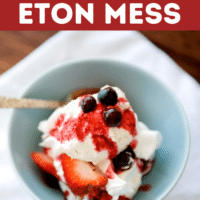 Eton Mess is a traditional British dessert made up of meringue, strawberries, and cream. I was actually making this with the Royal Wedding in mind, but then it struck me that this dessert is Passover perfection.

I know that this is not necessarily a Passover dessert, but it is perfect for your Seder table. Eton Mess is a traditional British dessert made up of meringue, strawberries, and cream. I was actually making this with the Royal Wedding in mind, but then it struck me that this dessert is Passover perfection. The Passover meal is one of my favorite meals all year, but the dessert is usually lacking. Without the use of leavening, dessert can really take a back burner. Last year, I made a delicious matzo toffee, but this year I making Eton Mess.

It is very simple to put together. I made my own meringues, but of course, you can buy them. You can make your meringues up to a week ahead of time if you keep them in an airtight container. I used some frozen raspberries to make a syrup and whipped some cream. Some beautiful fresh berries and you have a light and airy spring dessert. Most of the pieces of this dessert can be made ahead of time and assembled right before you are going to serve it.

This recipe is more about a technique than a recipe. It really depends on how many people you need to serve. I think of it more in terms of layers. I originally started making this dessert in mason jars, thinking that it would be adorable for a picnic (and it would) but I did not like how they photographed it. I made some in a bowl as well, and you can make them as small or as large as you would like.

For the meringue (adapted from Simply Recipes):

To assemble the Eton Mess:

Step 1: Preheat your oven to 300 degrees. Line 2 baking sheets with parchment paper. Put the egg whites and a pinch of salt in the bowl of a stand mixer. Start off slowly and beat the egg whites until they form bubbles all around the same size, about 2 to 3 minutes. Gradually increase the speed of the mixture and very slowly add the sugar. Add the vinegar. Beat for another 4 to 5 minutes. The egg whites will be very glossy and will hold their peaks when you lift them from the bowl with the whisk.

Step 2: Put the meringue into a piping bag, I like the star tip, but you could also use a large round tip. Or no piping bag at all, you could just drop them with spoons.

Step 3: Here is where it gets a little weird. Put the sheets into the oven, close the door, and turn the oven off. Yup, that is right, turn off the oven. Let the cookies stay in the oven overnight. They will harden and dry out. I promise, it really works. If you are not going to use these right away, put them in an airtight container for up to a week.

Step 4: Start with a few meringues and break them apart. Put them in the bottom of the bowl that you are making these in. Layer some berries.

Step 5: Add a layer of whipped cream and raspberry sauce. A quick note about the raspberry sauce: I just took a bag of frozen raspberries and put them in a saucepan with a few Tablespoons of sugar and a squirt of lemon juice. I brought it to a bubble and then strained it with a sieve. You could also puree the whole sauce, but I did not. It really doesn’t matter at all.

Step 6: Keep layering until you run out of the components.

So whether you are making this as a Passover dessert or to watch William and Kate tie the knot (which I cannot wait to watch!), it is a delicious way to start or end a day.

This recipe looks amazing, I will try it out today, but what if I don´t have enough time to let them overnight? Is there another option, thank you so much.

By the way, I LOVE your blog

Thank you! I think that it will be fine.

Wow! I've never heard of this dessert before! And your method of baking meringue is so interesting! I should try it next time. I've tried to make meringue a few times but they never turned out flawless... maybe this method helps! The dessert looks fabulous - so airy, summery, vibrant!

It is a good method if you have time and plan ahead. I love this dessert too. Everything together just works!

Oooh these look so lovely! I've always loved the name "eton mess." What a perfect name for a dessert!

they are! Thanks K&B.

Meringue cookies are so good and are low fat as an added benefit! This looks delicious.