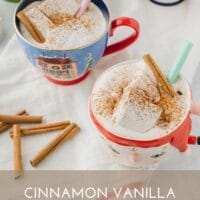 These delicious marshmallows are delicious in hot chocolate, festive coffee drinks and warming and cozy cocktails. They’re also great roasted s’mores style and sandwiched in between graham crackers and chocolate. However you use your marshmallows, I can assure you it’s worth making them from scratch.

In a container with a tight-fitting lid, add powdered sugar, cornstarch and cinnamon. Gently stir to combine. Then, coat a 9″ x 13″ baking dish with a generous dusting of the sugar mixture. Be sure to cover the bottom

and the sides entirely. Set the pan aside. Close the lid of your sugar mixture container and set it aside. You’ll need it again.

In the bowl of an electric mixer with the whisk attached, add a half cup of water. Sprinkle the gelatin over the water to bloom. Mix. Then, add in the salt, cinnamon and vanilla bean paste. Set the gelatin mixture aside while you make the sugar syrup.

In a medium saucepan, add the remaining water, sugar and corn syrup. Without stirring, cook over medium heat. When the sugar dissolves, increase the heat to medium-high and cook until a candy thermometer reads 240 degrees F.

Increase the speed to high and whip for 10 to 15 minutes or until the mixture gains volume and becomes glossy like a marshmallow.

Leave the pan uncovered at room temperature for at least 6 hours to overnight. When you are ready to cut the giant marshmallow sheet into squares, turn it out onto a cutting board. With a pizza cutter, cut the marshmallow into 1 1/2″ wide strips. Dip the side of each strip into the sugar mixture. Then, cut the strips into about 1″ square. Make sure every marshmallow side is coated in the sugar mixture so they don’t stick together.

Store in an airtight container at room temperature.

What to do with Homemade Marshmallows

Why are Cinnamon Vanilla Bean Marshmallows So Good?

How to Store and Freezing //

Storing: Marshmallows should always be kept at room temperature. Refrigerating will dry them out quickly, and freezing them destabilizes the ingredients causing the marshmallows to fall flat. They will be fine stored in an airtight container on the countertop for 5 to 7 days.

Can you roast homemade marshmallows over an open campfire?

Yes, you can roast homemade marshmallows over an open flame just as you’d package marshmallows. I recommend using a heat-safe tool and toasting them low and slow over a low flame.

What are the ingredients of a basic marshmallow?

Why did my marshmallow not set?

Temping the sugar syrup is super important. If it isn’t between 240 and 250 degrees F, the marshmallow mixture will not set and be sticky and heavy.

Where is the recipe

Is there a recipe? I’m only seeing a novel about someone skids and bread and I can’t find any recipe.

At the bottom. SCROLL.

These are so gorgeous, Bree! I love homemade marshmallows!

Thanks Kristen, I do too. They are one of my favorite things to make.

I have a question - how does the sugar mixture stick to the 13 x 9 pan with no cooking spray or butter?

Thanks for asking (and answering)this question....I was just about to ask the same thing! Good luck to you...I'm making these this weekend for my office colleagues.

It is a thick layer of sugar and it completely covers it, it also sort of sticks to the sides. It does work.

I have never made homemade marshmallows - something about unflavored gelatin that kind of spooks me, but these look and sound so fantastic that I may just need to try!

Your hot chocolate bar sounds fantastic! What a terrific idea. I think I will do that for Christmas (if not before) - maybe for our Advent study group at church!

Unflavored gelatin is gross. But it is magical when it makes marshmallows. I forgive it. :)