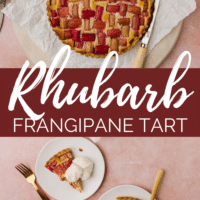 Rhubarb Frangipane Tart – a rhubarb tart filled with almond cream topped with spring rhubarb and brushed with a ginger and vanilla glaze.

Rhubarb season is here and I could not be happier about it! Rhubarb is one of the most beautiful vegetables (I always thought it was a fruit because you always see it in pies and jams). It is far too sour to eat raw, so it needs to be sweetened with sugar. Often you will see it paired with strawberries and that is a truly delicious pairing.

I’ve been watching a lot of Great British Bake Off lately and that was the inspiration for this rhubarb frangipane tart. Paul and Mary (and Pru in the newer episodes) have a lot to say about crisp crusts and no soggy bottoms.

In one pie episode, Paul Hollywood went hard for American pies. He thinks they are too sweet and thinks that all American desserts need to have the amount of sugar reduced by half. Let’s not go crazy Paul. When we lived in Europe, I often felt like the desserts weren’t sweet enough, so let’s agree to disagree, ok?

I made a sweet tart shell, filled it with almond cream, topped it with rhubarb, and brushed it with a ginger and vanilla glaze for shine. I served mine with Diplomat cream to really drive home the GBBO factor, but ice cream or whipped cream or nothing at all is fine too.

What’s the difference between a tart and a pie?

Pies and tarts aren’t the same but are closely related to each other.

A tart has shallow sides and only a bottom crust. The dough is usually a sweeter, pastry dough. You don’t always have to roll out this dough, depending on the recipe you can press it into the pan. Tarts are not served in the dish they are baked in, they are removed from the pan and the tart is able to hold its shape on its own. I use a 9-inch tart pan with a removable bottom.

Where a pie has more crust surface area up the sides of its pan. It can have one crust or a top and bottom crust. The dough itself is typically more savory, and the goal is a flaky and crisp pie crust. Pies are served in the vessel that they were baked in.

Either way, stuff in a crust is delicious. So let’s make one.

Rhubarb. The glorious spring veg/fruit. It looks like pink celery and is in season from April to June. You can also get frozen rhubarb, but fresh is best for this.

Almond flour. Almond flour is blanched almonds that are finely ground into a flour. This is a gluten-free flour and I love baking with it.

Ginger. Rhubarb and ginger are a delicious pairing. This adds just a little kick and freshness to the top of the tart.

Vanilla bean paste. My secret weapon for elevating any dessert. When you can see the flecks of vanilla bean, it instantly feels decadent.

Rhubarb frangipane tart making entails a little more time and effort than my normal desserts, but the end result is 1000% worth it. And there is nothing more rewarding than releasing a tart from the pan putting this beauty on a plate.

I love the rhubarb and almond combination, but rhubarb has a very short in season window. That being said, this is an EXTREMELY versatile recipe. Here are a few frangipane tart combinations that I think are equally delicious:

Frangipane tarts are best eaten the day they are made. Fruit, especially rhubarb has a lot of moisture and they can seep into the crust. Frangipane is also quite wet, so it isn’t going to be crisp. If you need to make it ahead of time, do not glaze. Keep the tart very loosely covered at room temperature. Put in a hot oven for a few minutes to crisp the pastry, then glaze.

How to Serve Rhubarb Frangipane Tart //

Tarts are delicious all on their own, but this one, in particular, I like to serve with Diplomat cream. Back to GBBO, I’ve learned that in England, rhubarb and custard are often served together. Diplomat cream is custard lightened with whipped cream. It is an extra step, but hey, we’re making a tart. So why not?

You could also go the traditional whipped cream route or some vanilla ice cream.

As an Amazon Associate and member of other affiliate programs, I earn from qualifying purchases.

This post contains affiliate links. If you make a purchase using any of these links, I make a small percentage of that sale at no cost you.

Seeing your recipe has reminded me that I haven't had rhubarb in ages. I can't wait to get some and make this. Thank you.

I hope you can find some and make this!

Thank you for creating new recipes right now. It is comforting to see your familiar face!

Thank YOU for reading them! Stay well! XOXO.