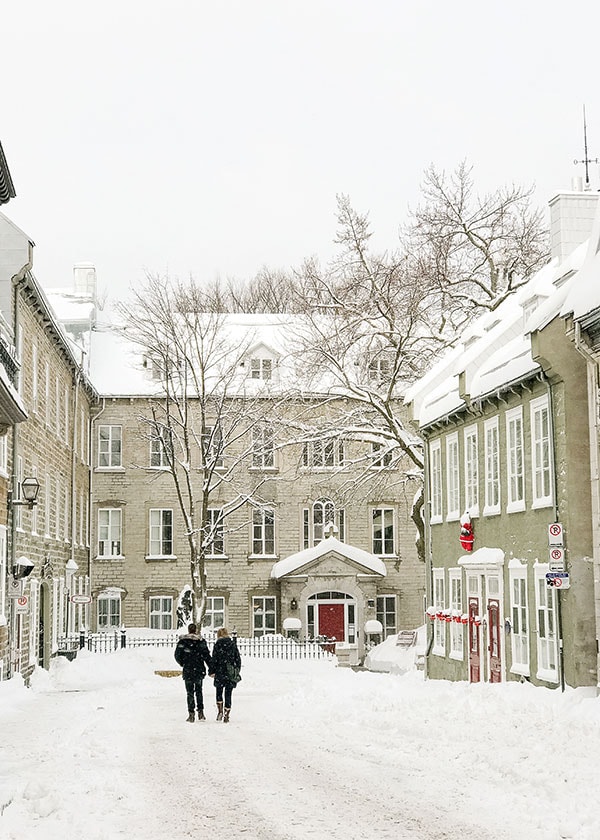 We left Montreal and made the two-hour drive to Quebec City. We drove into a snow-covered winter wonderland. Quebec City has been on my bucket list for years and I am so glad to be able to check it off my list. It was gorgeous, quaint, and felt like being in France. We loved it, and the kids have been asking repeatedly to go back. We went a few days before the New Year and there were a lot of things to see and do.

We chose Quebec City because we have been listening to the Inspector Gamache books on the long car rides from Cape Cod to New Jersey. The series is tame enough for older kids (who actually listen to the story and not just put on headphones the whole time) and interesting for adults. Quebec is almost a character in the stories because all of the books are set in or around Quebec. I’ve never read or listened and not craved red wine and French food afterwards. When we were deciding what to do over the holiday the kids wanted to see the city we have heard so much about. 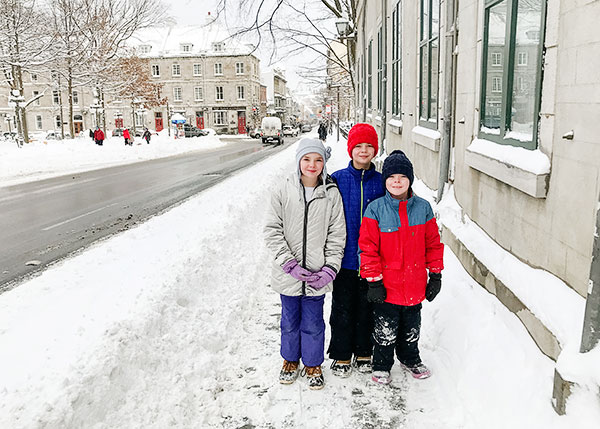 We stayed at Hôtel Château Laurier Québec, across the street is a beautiful park. Since it was New Years, they had an outdoor carnival set up and the kids were in heaven. More on that later. 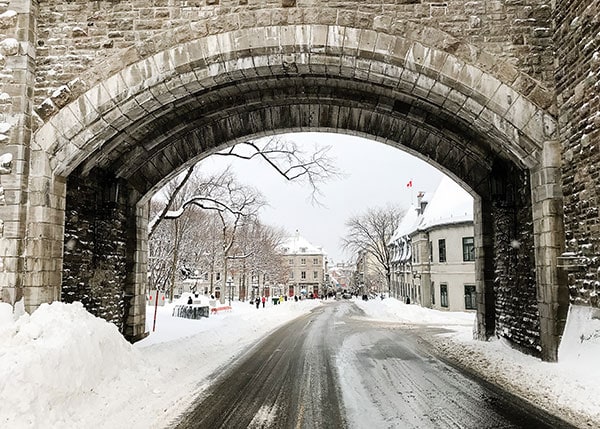 A few blocks from the hotel is Old Quebec. You walk through the opening of the fortified city and step into old Europe. After living in Europe for a few months now, Quebec feels so much like Old Europe. It is charming, beautiful, and full of culture. 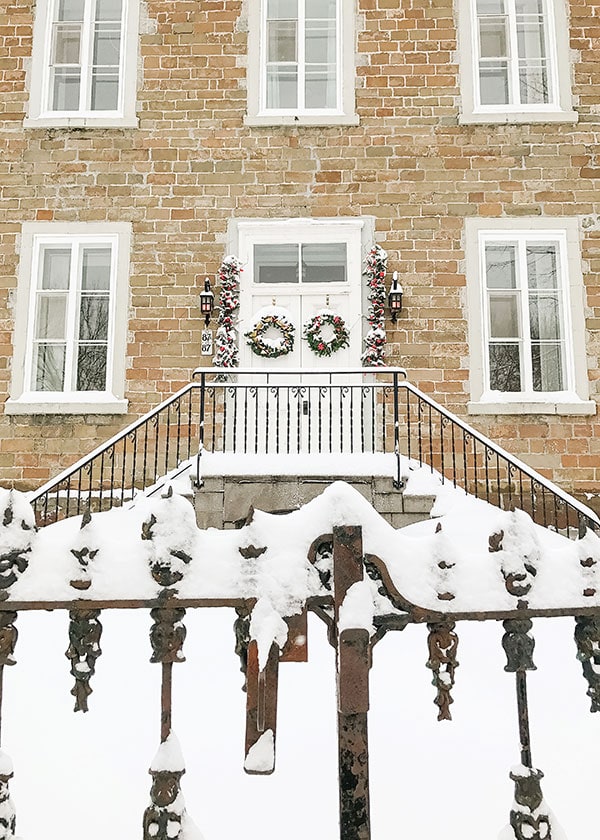 While it is incredibly cold in January, it doesn’t feel cold at all. The people are warm and friendly. There are tons of little cafes and shops to wander into to warm up along the way. 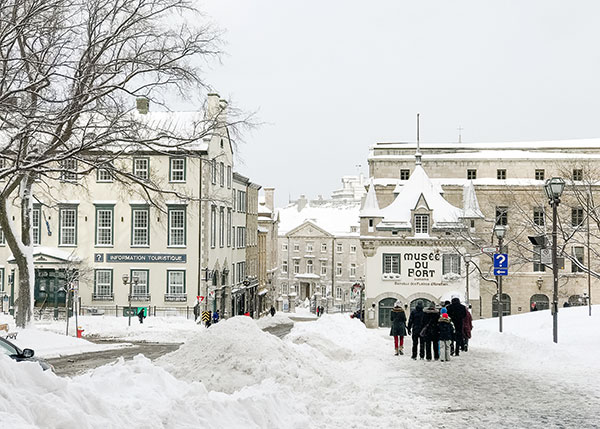 This trip is my favorite kind. We had no agenda and just walked around and took it all in. In truth, we wanted to see how our kids would do in a foreign city not being able to read or understand the language. We hadn’t received orders yet but knew that there was a better than good chance that we would be leaving the US. We wanted to see if the kids would adapt easily or be super freaked out. They handled it like pros. 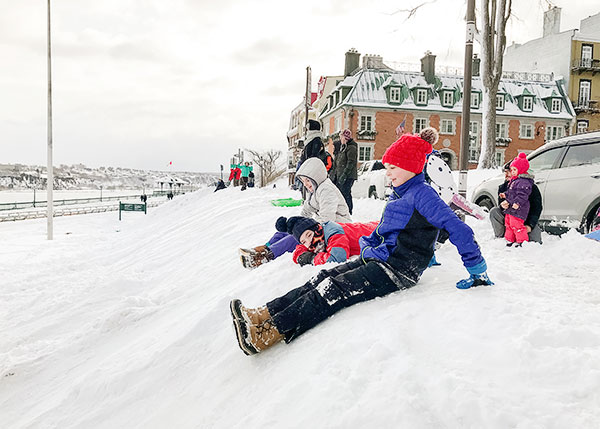 And because there was so much snow, all the kids wanted to do was play in it. They could have spent the entire time playing in the huge mounds of snow and skipped everything else. 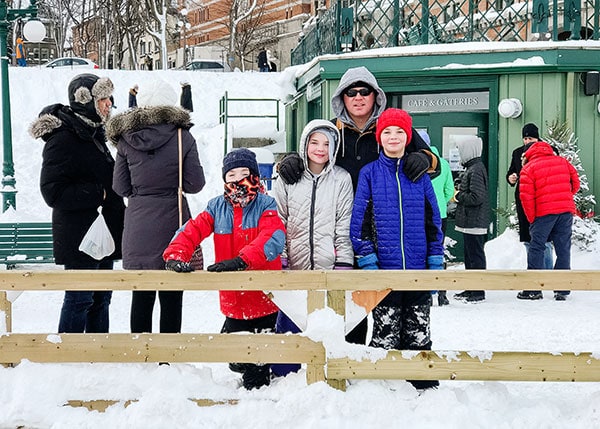 A must do is the Toboggan Run in front of the world-famous Le Chateau Frontenac. You buy tokens at the coffee shop at the bottom, grab a toboggan and climb up the steps to the top. I think it is a toonie per run, so $2 Canadian? I think we spent $30 for hours of amusement. Wes and I did the first runs with the kids and then they did it themselves. It is deceiving, it doesn’t seem like it is very high or that you will go very fast, but believe me, you do. It is so much fun. 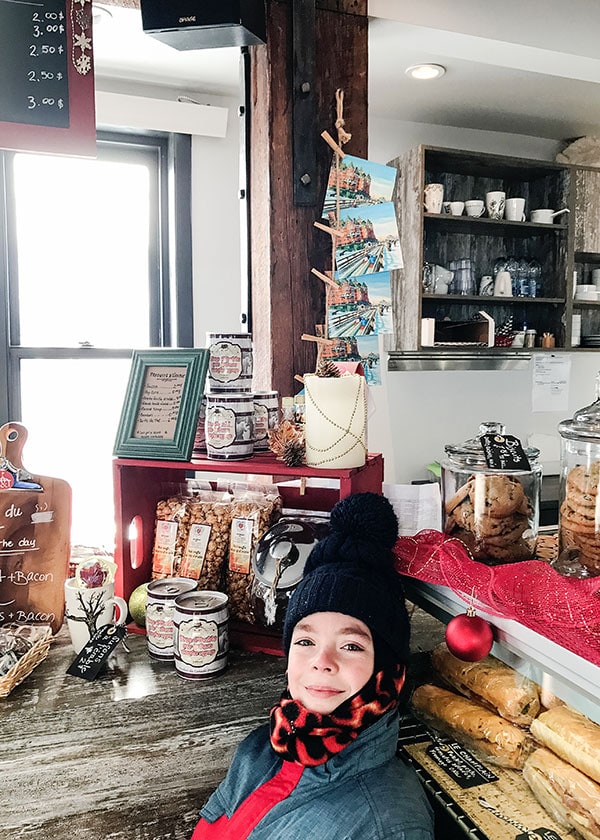 Afterwards, you can go back to the coffee shop for a warm drink and a snack. The cookies behind Clay’s head were delicious. 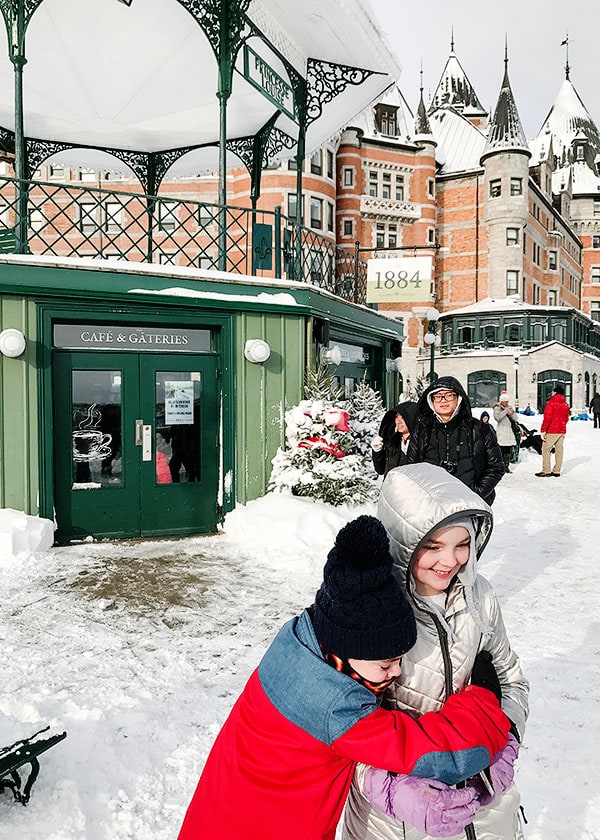 I’m not sure if he is hugging her for love or for warmth. 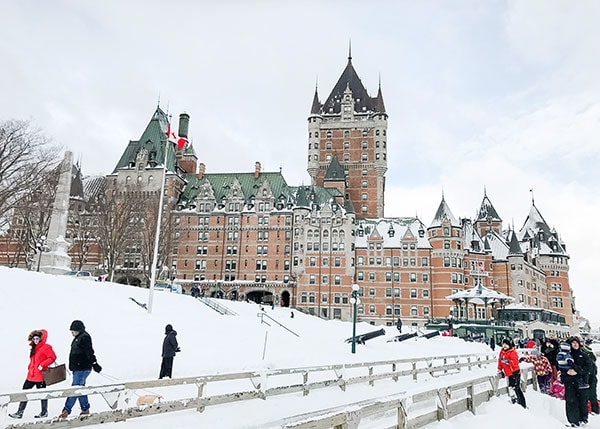 Le Chateau Frontenac is one of the most photographed buildings in the world. (I had no idea.) It is right on the St. Lawrence River and after taking a walk around inside, I’m sorry we didn’t splurge and stay here for at least a night. 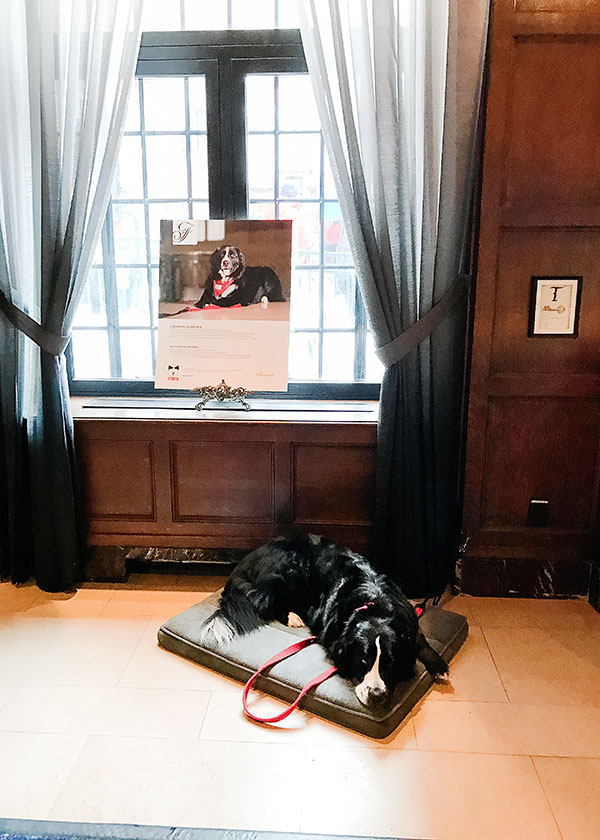 This is Daphnie, she is a St-Pierre and a hotel ambassador. She has a tough job. She gets petted and played with all day as people check in and come and go at the hotel. The kids sat on the floor with her and she let them love all over her. I think that all hotels should have a dog. 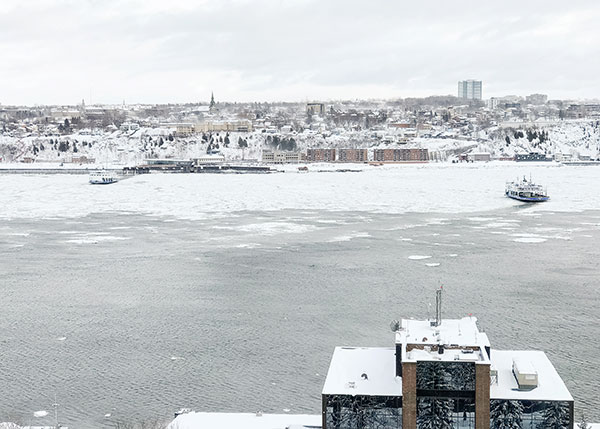 As cold as this looks, it never felt unbearable. It was in the 30’s, but it wasn’t windy and completely doable. We took lots of breaks and warmed up along the way. Hot chocolates, coffees, and cocktails in the afternoon were welcome excuses to recalibrate and start over.

The views are beautiful and I watched the ferry dodge big patches of ice from the gazebo. Wes and the boys also found this fascinating. 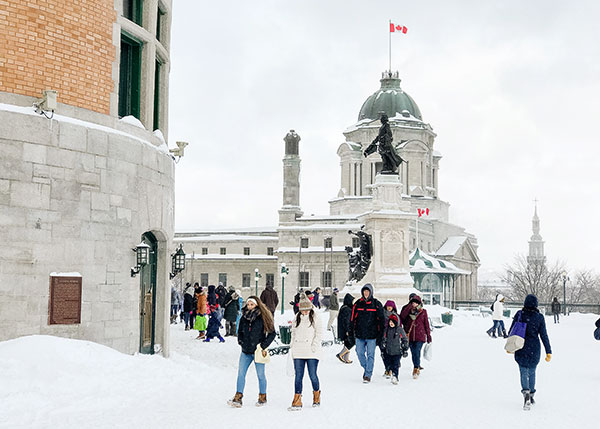 In front of Le Chateau Frontenac is the statue of Samuel de Champlain. He is an important figure in Canadian history. He is credited with creating the first accurate map of the coastline and establishing the Canadian settlements. 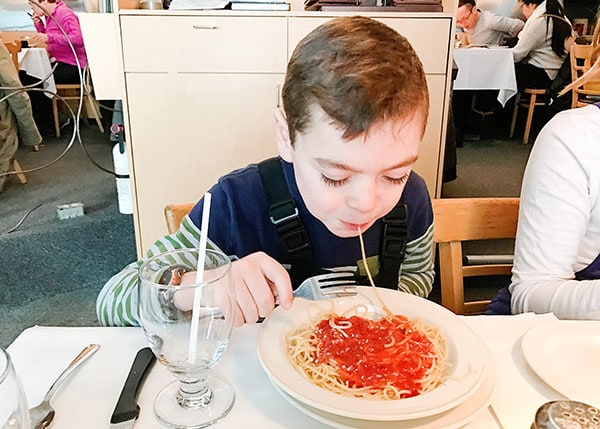 There are great cafes and bakeries all over the city. We stopped into one after a few hours on the toboggan and this is where my children discovered their love of crepes. Crepes have had an integral place in our home since this trip and now a must-have whenever you visit European towns. You can get a really good crepe just about anywhere in Europe. (Trust me on this – get a Nutella crepe with a teensy bit cinnamon sugar, it’s perfection.) 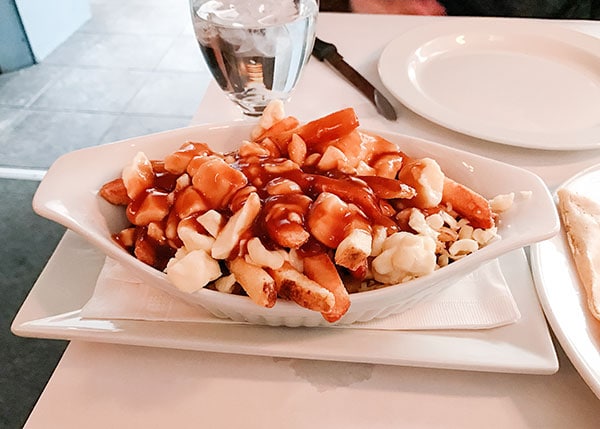 We also introduced our children to poutine. I get that this does not look appetizing. That being said, it is not only appetizing but downright heavenly. Will especially has an affection for this Canadian delicacy. What is poutine? Crispy French fries, with a generous amount of brown gravy and cheese curds. Don’t knock it until you’ve tried it. For some reason that I can’t quite comprehend, it just all works perfectly together. 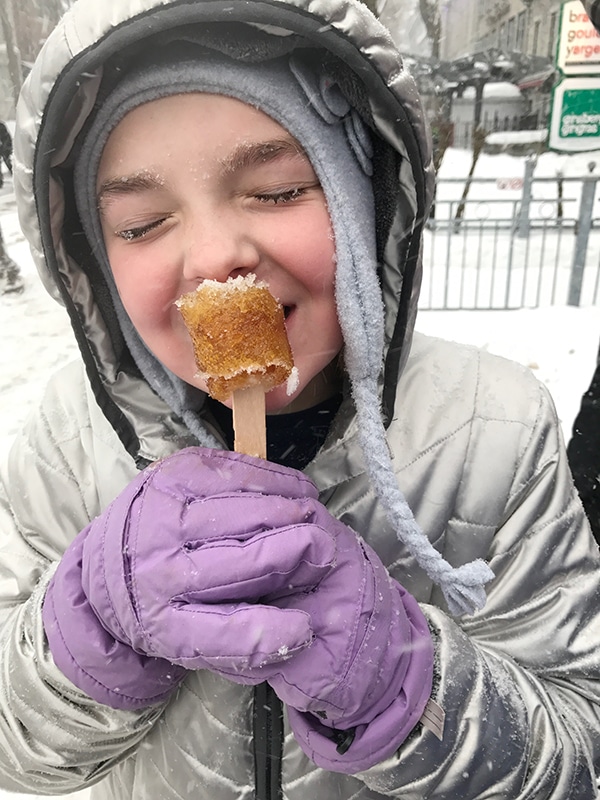 We also had many a maple candy. There are street vendors all over that pour hot maple syrup into troughs of snow and roll it up into a perfect warm taffy. The vendors were so sweet, they let my kids do it themselves and tolerated my baby French. 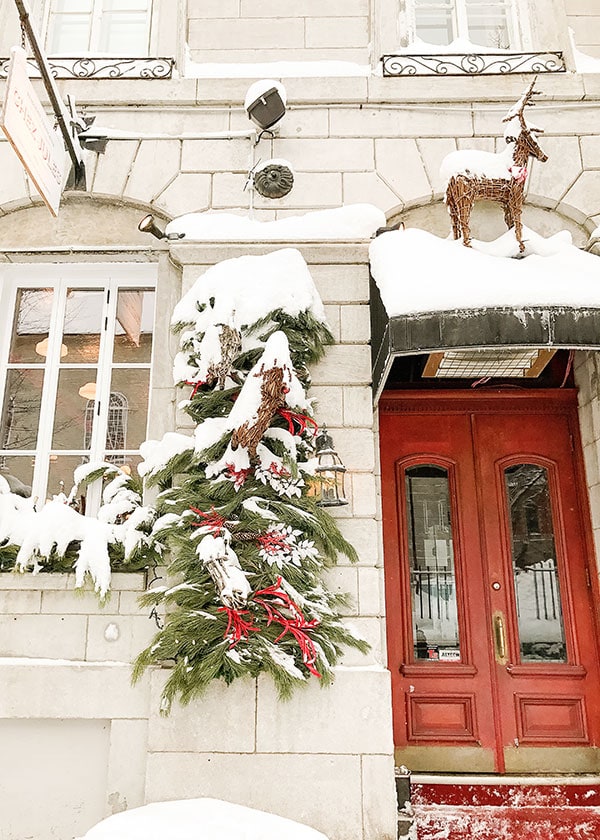 The city was covered in snow and still decorated for the holidays. It was a magical winter wonderland. 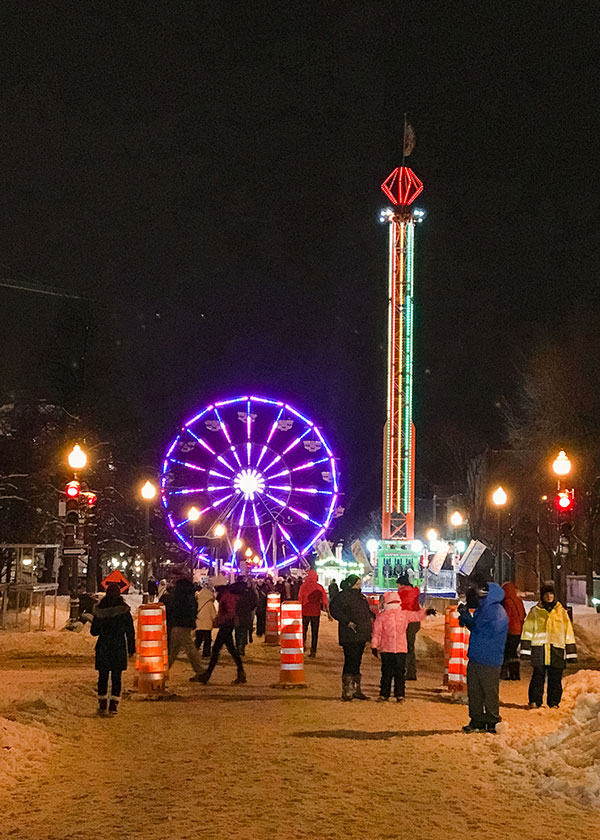 A pleasant and unexpected surprise was that there was a carnival to celebrate the New Year. It is super weird to be on the rides in the snow, but the kids LOVED it and even better, the kid activities were FREE. Rides, games, and all kinds of fun things. This was across the street from the hotel. Will ziplined from one end to the other, he has ZERO fear, and it was a way to start a new year.

One of the things that we miss the most about living in Canada is Tim Hortons. We love Timmy’s and stopped just about every time we saw one. We take a family New Year’s picture every year and we took this on our way back to Massachusetts. With all of the travel we have done lately, the kids talk about this one. We had such a good time and it is a really easy drive from New England. 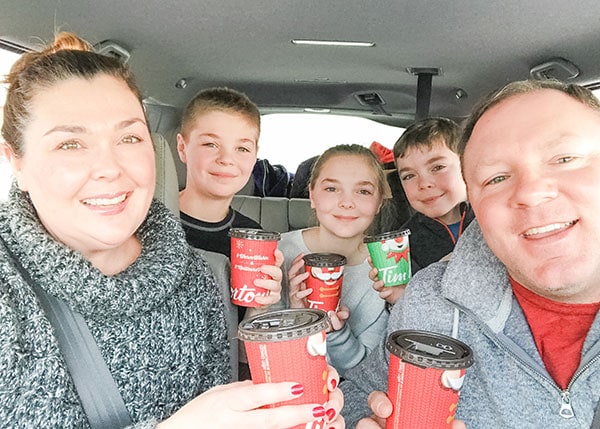 […] crepe discovery happened on a trip to Quebec. I remember my mom making them for us as kids, but I hadn’t had one in years and years. We […]

Thank you! We loved Quebec so much.

I stumbled across your blog for the Christmas light cupcakes, so glad I poked around! Quebec is on my travel bucket list. Looks so beautiful!

Welcome! Quebec is magical! One of our favorite trips ever. GO!

What a beautiful trip!! I am inspired to go to Canada more, it's so much closer than many destinations yet feels like a really different culture in Quebec!

It is! And you feel like you are exploring Europe. The food is amazing, so much culture and the people are so nice.

I am a Canadian with three kids and I am finding it increasingly difficult to book hotel rooms. May I ask, do you disclose that you have three kids? Does one sleep on the floor? Do you ask for a cot? Thank you for your advice. PS Love the blog and all your writing and recipes!

In Europe, we have to get two rooms. And you have to disclose because you are required to show passports when you check in. Occasionally if you call or email, they might let you book one room. And then one usually sleeps in a sleeping bag on the couch. But my kids are older so they get their own room. Hotels are usually really good about giving you adjoining rooms or one right across the hall. I believe we got a suite at this particular hotel or a family room. More often than not we use Airbnb or Homeaway and get an apartment or a house for this reason.